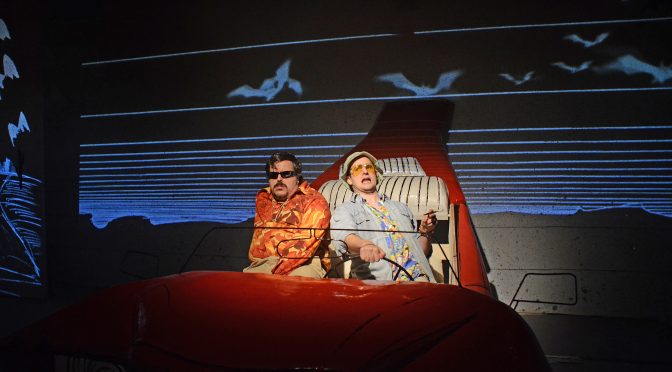 The latest incarnation of arty happenings underneath Waterloo station has started this week. The Vault Festival offers an inspiring array of theatre, comedy and club nights headed by productions of Ian McEwan’s The Cement Garden and Hunter S. Thompson’s Fear and Loathing in Las Vegas. The latter opened last night, with drug-addled gonzo journalism from the casino capital, adapted and directed reverentially by Lou Stein and sure to please the book’s many fans.

The production has plenty of invention; the cars driven and hotel beds debauched on are cleverly evoked and a sure highlight is the use made of Ralph Steadman’s magnificent artwork. It’s the real star here. The show includes never before seen works and embellishes Steadman’s vision with projection and animation. His drawings are an elaboration of the drug-induced mania Thompson’s alias Raoul Duke and his factotum Dr.Gonzo experience while reporting on the Mint 400 drag race and the District Attorney’s Narcotics Conference.

Strongly caricatured, pretentious commentators and aspiring prophets, the leading roles are thankless tasks for actors Ed Hughes and Rob Crouch. Hughes’ Duke is cleverly stilted, but the edginess that’s the result of all those drugs becomes, predictably, tiresome and while Crouch’s Gonzo is performed with great physicality the role itself is two dimensional. Various innocents, casualties to encountering Duke and Gonzo, are performed by an ensemble who work hard to be surreal and gurn plenty, but the outcome is too tame.

Thankfully, Fear and Loathing in Las Vegas, is held together by John Chancer, who plays the role of narrator. Taking on Thompson’s authorial voice, Chancer is commanding and has grasped both the despair that gives the work some depth and the dead-pan quality of Thompson’s humour. Unfortunately, when he isn’t speaking there isn’t enough to take your mind off the make shift venue’s dreadfully uncomfortable seating or terrible sightlines.

The whole production should be more of an assault on the senses than it is and hopefully this can still be changed. It might be an idea to listen to Dr. Gonzo’s demand for “Volume! Clarity! Bass! We must have bass!”. There are moments in the second half when the projections become more immersive and it makes a big difference. But by then the mood is more thoughtful and we’re brought down before we’ve reached a high.

Written 31 January 2014 for The London Magazine