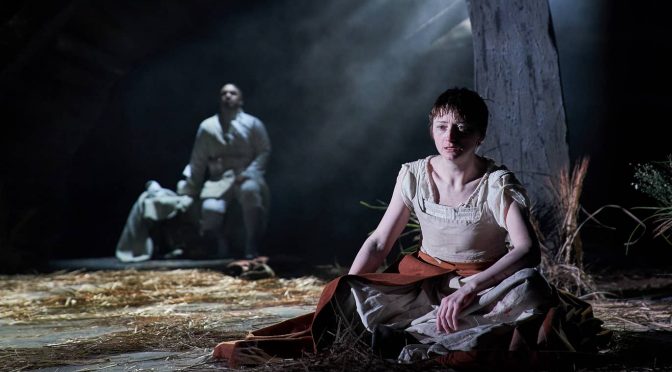 We know that Faustus, who famously sold his sold to the devil, makes for a good story. It’s been told often enough. This new version from playwright Chris Bush is a mixed bag, but it does a lot with the tale’s potential, and modern twists make the story approachable and intriguing.

Changing the gender of the protagonist is a good start. The show provides a star role for Jodie McNee who plays Johanna Faustus with gusto. She’s ready to spar with Satan as much as sign Beelzebub’s book, and sexism becomes the big evil in the play.

Part of Johanna’s motive for her diabolic bargain is to be independent – to be her own woman in 17th-century London. Cue witches, corruption and the plague. Bush sets up an entertaining story with interesting ideas.

But things start to go awry with the show’s humour – there’s a playfulness with the past that doesn’t always work. The jokes are good, but dilute the tension too much. Take Mephistopheles, the devil contracted to serve Faustus: Danny Lee Wynter does well with the wit in the role, but that wit doesn’t help the play as a whole.

A further big idea is sounder – Faustus has a plan to “save the world to shame the devil”. It’s never clear how selfish our heroine is; Bush and McNee do well to keep this question open. But, of course, doing good isn’t easy, and the show becomes more a wait to see what will go wrong. While the passion that drives Johanna has an interesting origin, her anger becomes abstract and simply isn’t hot enough.

As the action moves into the future and starts to engage with technology, this coolness increases. The play gets less surprising and at times a little silly. Messing around with Elizabeth Garrett Anderson and Marie Curie turns into a diversion rather than a serious point; GM foods and minds uploaded into the cloud follow too quickly. The latter is intriguing in a play obsessed with souls (a tricky topic in 2020) but needs fuller development.

“Wait” is the show’s final word. And I like the way it’s given to Johanna. But by that point it feels as if we’ve seen enough, and Bush hasn’t managed to inject any sense of peril about what might come next. An order to the devil is appropriate for this feisty Faustus – but it’s a damp squib of an end for a play that wants to be fiery.