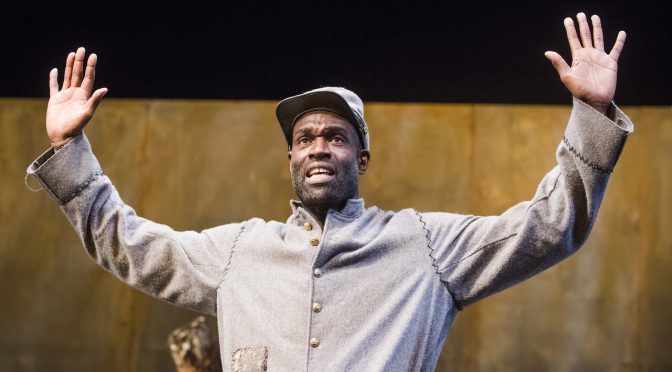 This American Civil War story, much lauded in the US, comes in three parts, following the adventures of its main character, a slave called Hero. Opening with a debate over his ‘choice’ to accompany his master to war, the second act sees a similar dilemma – an encounter with a Yankee soldier that presents him with an opportunity to escape. Finally, Hero returns home a traumatised man. All three vignettes are strong and cumulatively powerful.

Are you waiting for a twist? There is one, of course – playwright Suzan-Lori Parks’ inspiration is Homer. Character names are enough of a clue (a dog called Odyssey has a talking role in the final scene) but also note that, in true Greek style, songs play an important part and there’s a distinct lack of action on stage. So there’s highfalutin analysis to be done here, for sure. Above that is Parks’ skill at story telling. Simple. This is an emotive tale of twisted interdependence. Politics aside, the psychology is fascinating, the writing clever but never tricksy. The concept might sound contrived but it’s a back-to-basics approach that works.

The show is also superbly acted. Steve Toussaint as Hero deserves to be singled out. Having to shoulder so many dilemmas, it’s an achievement to hold the audience so confidently. Working with him is an excellent ensemble – a chorus of fellow slaves who return in the finale as runaways, comprising Sibusiso Mamba, Jason Pennycooke and Sarah Niles. Special mention also to Nadine Marshall as Hero’s love, Penny, whose accent is superb and who ensures the emotions in Parks’ riff on the theme of loyalty.

The play’s questions of identity need little further stress – restraint is the key and with this director Jo Bonney’s job is well done. Moments of direct address or the use of modern costume feel like guiding hands rather than gimmicks, so deftly are they handled. Parks is a shrewd observer of history, an original thinker and technically accomplished. But she also has a sincere eye – with a watch on contemporary resonances and why these lives matter – that confronts the audience and sends a chill down the spine.