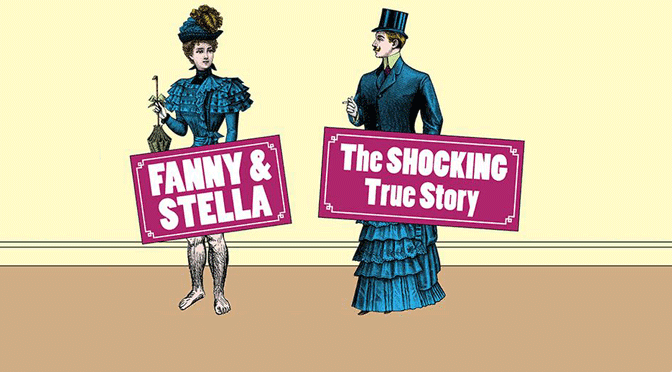 A true story that’s a gift to a dramatist, Victorian transvestites Ernest Boulton and William Park, with their inspiring friendship, risqué love affairs and dangerous brush with the law, are truly fascinating. Playwright Glenn Chandler’s masterstroke is to have the characters’ eponymous drag personas present their own story in a music-hall style that makes for great entertainment.

Charles Miller’s accompanying Victoriana songs are a wicked delight that I’d have like to have heard more of. And the whole cast is superb. Phil Sealey, whose character represents the manager of the venue uneasily hosting Fanny and Stella’s performance, takes on numerous roles in the retelling of their shocking story. Along with the ladies’ attempts to outshine each other, there’s a faux improvised humour that adds charm as well as laughter. As for the rest of the many jokes, some gags positively creak and the plentiful innuendo isn’t exactly sophisticated, but it’s all great fun.

While the history forms an effective questioning of Victorian attitudes, there’s a purposefully contemporary feel to the show, seen most clearly in the two leads. Robert Jeffery and Marc Gee Finch, in the title roles, are both fine performers, great with the songs and even better with the show’s bitching – sorry, ladies, I daren’t pick a favourite. Camping it up for all their worth, yet capable of providing space for more sombre moments, it’s always funny to see characters milking applause when they are so clearly already commanding the spotlight.

The second half, dealing with Fanny and Stella’s scandalous trial and cruel imprisonment, drops off a little. There’s a touch of preaching to the choir and wish fulfilment – I am not convinced the story shows an early ‘victory’ over prejudice – but the show knows its audience; as the UK’s only full-time professional LGBT theatre, receiving no public subsidy, Above The Stag can’t afford not to. It’s a tribute to the show’s strength that I think the company is selling itself short. I’d love to see the show in a bigger venue (what about Wilton’s Music Hall?) and believe Fanny and Stella have the potential to appeal to all – they deserve to be massive stars.