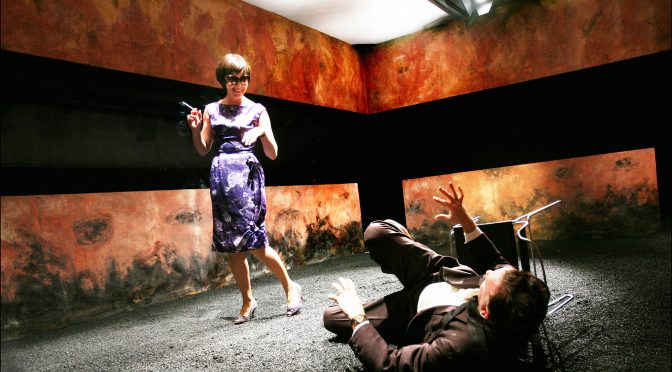 The Print Room is a new theatre for London – and that, in itself, deserves applause. Artistic directors Anda Winters and Lucy Bailey, and BBB Marketing, which owns the building, should get a standing ovation for what they have achieved.

The Print Room’s first production, Fabrication by Pier Paolo Pasolini, is directed by Bailey. She is a bold director, intelligent and inventive. Indeed, Bailey’s only shortcoming seems to be her misplaced passion for Pasolini.

A caveat – I have never enjoyed Pasolini’s work. The Print Room has the coup of premièring his plas in this country, but it is hard not to resist the flippant response that we can see now why nobody else has beaten them to it. It turns out that Pasolini has a lot to say about theatre. But then he has a lot to say about everything. Trouble is, he doesn’t say any of it very well.

Despite Jamie McKendrick’s poetic translation being frank and direct, it cannot get past Pasolini’s perversely Baroque approach, which forces so many ideas on the audience they become opaque. There is no doubt an argument in the text for this. Pasolini toys with irony and the idea of a meaningless tragedy, just as he plays with plenty of other notions. The problem is that none of his arguments is satisfactorily developed.

What makes the evening all the more frustrating is how good the acting is. Jasper Britton gives a stunning performance as a Milanese industrialist who falls in love with his son, who is played with great passion by Max Bennett. Geraldine Alexander and Letty Butler are both wonderful as the mother and girlfriend who attempt to engage with this twisted Oedipal story. Martin Turner plays Sophocles in appropriately ghostly fashion and remarkably transforms himself into a beggar for the play’s final scene. Janet Fullerlove also has a great turn as a fortune teller, giving a highly nuanced performance that manages to add genuine drama.

All perform within designer Mike Britton’s clever set – a rectangular pen in the centre of the theatre that the audience peers into. And yet we return to the problem of what they are asked to perform: Fabrication is wilfully obtuse. But everything else about this production bodes well for the future of The Print Room, and supporting the venue cannot be endorsed enough. I just can’t wait for a different play.

Written 19 November 2010 for The London Magazine