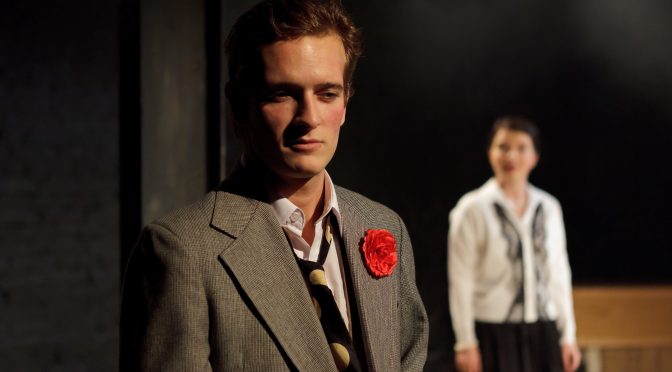 The Union Theatre in Southwark gives us the opportunity to see a ‘lost’ play by Shakespeare. Double Falsehood has been declared by the Arden Shakespeare to be a late collaboration with John Fletcher, and director Phil Willmott’s fascinating production provides us with the opportunity to decide if they are right.

The debate over authorship rages: the play has plenty of Shakespearean cross-dressing and a villain that seems familiar. However, the poetry is weak and there is a distinct lack of humour. But what does make the evening exciting is the chance to watch a ‘Shakespeare’ without knowing the plot! For that reason I’ll avoid any spoilers so you can see for yourself how gripping the story really is.

As Willmott has stated, academic speculation surrounding the text is less interesting than whether or not Double Falsehood works as theatre. He presents the play clearly and embraces some melodramatic vignettes that are compelling. Deciding to set the play near a monastery has some hairy moments – it can feel a little Carry on Cloisters at times, but the denouement feels all the more miraculous for its religious connotations.

There is a super cast to watch. Richard Franklin is suitably dignified as the Duke Angelo. His diabolical son Henrique is played by Adam Redmore with appropriate mania. Henrique’s victims are many (there’s more than a double falsehood going on here) and include the convincingly heroic Julio (Gabriel Vick) and courageous Leonora (Emily Plumtree).

The main victim is Violante (the clue is in her name). Jessie Lilley makes a professional debut to be proud of but the role itself poses problems for a modern audience. We are more or less comfortable with the outmoded beliefs of Shakespeare’s time, but Violante’s decisions take us too far. She certainly isn’t the kind of woman Shakespeare usually harps on about.

But join the debate – at the Union Theatre and online (the play’s website has a guestbook for your opinions). With the RSC preparing its version of the text (to be staged as Cardenio in April) the talk isn’t going to stop anytime soon.

Written 24 January 2011 for The London Magazine