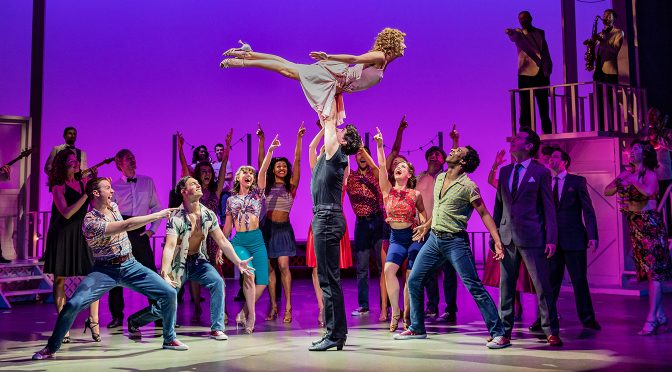 If you are a fan of the 1987 movie this show is based on there’s a chance you will enjoy seeing the action on stage. If you don’t know about, or don’t care for, the coming-of-age romance between a woman called ‘Baby’ and her dance tutor Johnny, seeing Dirty Dancing would be a mistake.

The production is a catalogue of frustrations and missed opportunities.

The slim plot (credited to Eleanor Bergstein) is difficult to follow. With scenes so truncated, a knowledge of the original is essential. Calling what we hear dialogue is excessive praise. The script is no more than a collection of famous lines, delivered in a rush.

The lead trio are Kira Malou and Michael O’Reilly, joined by Carlie Milner as Johnny’s colleague, whose pregnancy is the focus of the drama. All three have little chance to act or establish their characters. Tension evaporates in director Federico Bellone’s rush to the finish. And despite the shocking speed there isn’t even the relief that the show is short.

Cinematic montages are difficult to bring to the stage. The production doesn’t know what to do with scenes of Baby learning to dance (although Malou makes a valiant effort). For a scene practicing in water a screen descends so the audience can’t see what is going on. The sense of resignation rather than excitement about the challenge is depressing.

What of those missed opportunities? The dancing is good, but there’s surprisingly little of it. There’s strong singing from Samuel Bailey and Mimi Rodrigues Alves who each get a good number. But the show isn’t a musical; most of the songs are snatches to applaud and move on from. Could the production focus on one or the other? As it is, both the dancing and music are unsatisfying.

An effort to contextualise the story, to include the civil rights struggle, fails. A campfire and a protest song are added but simply confuse the already fragmented plot. Then someone remarks “remember last fall…the Cuban Missile Crisis” and…cut. Far bolder additons are needed. In a humourless show it was the only time I laughed.

Apologies to those who love the film, but the story cries out for updating and needs to change for the stage. Would some concession or embracing theatricality be too much to ask? Yes, I guess. If you assume the folks interested don’t want any surprises (which seems insulting). You get what’s advertised here. Includes the song and choreography of the finale. But strictly nothing more.