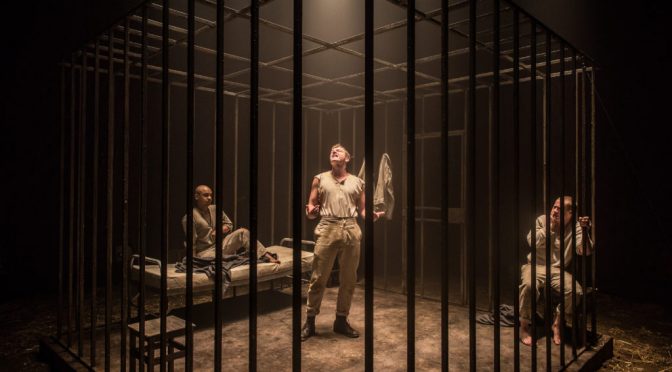 Lurid, dense and poetic, Jean Genet’s play is revived with an expert translation by David Rudkin. We join three prisoners in a cell who say they will be “the slow death of each other”. The felons plot a murder, while creating a hierarchy of criminality that baffles as much as it intrigues. Genet said the play should unfold as in a dream and director Geraldine Alexander bears the dictate in mind, so this is a style that won’t appeal to all. Cryptic and cerebral, it’s an experience that’s dazzling, but might leave you dazed.

The cell is a cube reminiscent of cage fighting, placed in a circus ring with sawdust on the floor. The design from Lee Newby fits the play perfectly and The Print Room’s (newish) home at the Coronet only adds to the atmosphere. With an impressive lighting rig utilised by David Plater, the production values are top notch. As are the performances – there’s outstanding acting here. The murderer Green-Eyes, awaiting execution, has the most “clout” in the cell and the character’s animal magnetism and poetic fervour are convincingly portrayed by Tom Varey, showing the twisted depths of Genet’s writing. The cellmates share an obsession with Green-Eyes. Lefranc’s crimes may be “hot air” but he becomes a chilling figure through a balanced performance from Danny Lee Wynter. And Maurice is confrontationally played as a “screaming Queen” by Joseph Quinn, who gives a professional stage debut of great detail that bodes well for his future career.

All three roles are challenging. Unlike most (maybe all) crime fiction, Genet isn’t interested in the personal motivation behind crime. Backstories are suggested, but can they be trusted? Philosophy is explored as much as psychology. All this could ring alarm bells – or excite. Call me slow, I wanted more pauses – time for everything to stop and slow down – allowing an opportunity to drink in the language. Instead Alexander’s emphasis is on the tension, so fair enough. A more justifiable quibble is that even in this strong production the depth of Genet’s text isn’t plumbed, with the roles of brute force and mindless violence neglected. Nonetheless, an exceptional show.