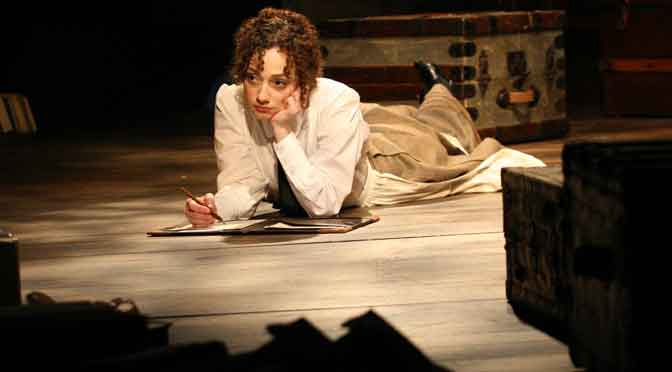 A new musical version of Jean Webster’s novel is the second production at London’s newest venue, the stylish St James Theatre. Adapted and directed by John Caird, with music and lyrics by Paul Gordon, it’s the story of the Pygmalion transformation of orphan Jerusha Abbott by an anonymous sponsor she nick names Daddy Long Legs. Through letters she’s instructed to write, but to which he never replies, they fall in love. Predictable of course, but this show is so charming you won’t mind leaving your cynicism at the door and simply enjoying yourself.

Set aside any quibbles of this Gigi style adoption and romance between the older ‘daddy’ and his vulnerable dependent. Jerusha is such an appealing heroine, it’s not so much ‘thank heaven for little girls’ – but thank heavens for millionaires. She deserves her chances (and a nine-point plan for an arts education that Mr Gove should take note of). It’s easy to see why Jervis, the lonely beneficial bachelor, falls for her. Perhaps Jervis’ angst at the “little deceit” he perpetrates doesn’t quite convince and the resolution is a tad pat, but by the end you don’t just expect that – you want it. It would be a travesty if things didn’t end happily and it isn’t much of a plot spoiler to put your mind at ease.

Megan McGinnis gives a tremendous performance that ensures you fall in love with her character. Beneath the saccharine is a sharp mind that comments on snobbery and sexism with an ironic sensibility and a superb knack for building the show’s gentle humour. Jervis is less appealing, but Rob Hancock does well to show his character’s vulnerability. This is a tightly acted two-hander with accomplished singing of a sweet score with some delightful lyrics. Bringing the show, and roles they originated with them from America, McGinnis and Hancock are a well-practised team and it shows.

Daddy Long-Legs is unusually, refreshingly, innocent with two bibliophiles courting in old-fashioned style. As Jerusha discovers her emotions, and Jervis becomes some kind of Upper East Side Orlando pasting her letters to his study walls, you can’t help but wish them well. Daddy Long Legs should really be too corny to work but it’s a mark of its greatness that even the most jaded will be won over.

Written 8 November 2012 for The London Magazine