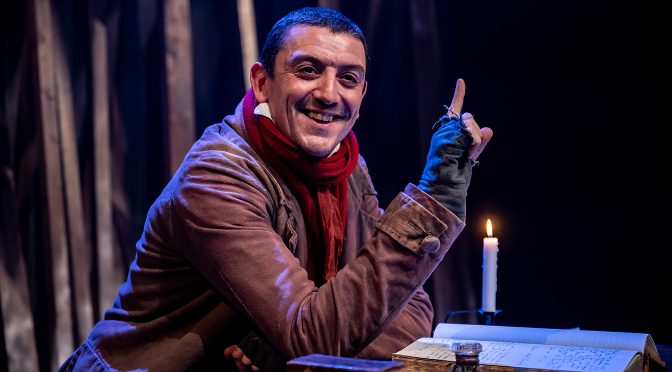 ‘Tis the theatrical season for Christmas carols. If you’re looking for something a little less traditional, then Alexander Knott’s new play is worth treating yourself too.

Cratchit is a spin on the Dickens classic. It uses the same characters and there are still ghosts. Bob, Scrooge’s clerk, is the focus. While the miserly master is haunted, Cratchit has his own problems to deal with.

Expanding on the poverty Dickens has already written about with legendary skill isn’t wholly successful. But taking a minor role in the original means there’s plenty of room to expand and Knott takes advantage of this.

We see an avuncular Bob at first. The surprise is that he likes a drink. John Dagleish is excellent with the audience and has fantastic charm. As Cratchit’s problems grow, the character darkens. The “painted smile” puts on as part of a cowering servility hides a good deal of anger. There are powerful moments dealing with fear and depression. And it’s a shock to see him contemplate suicide.

The role is an excellent showcase for a performer. Taking on other characters, including Scrooge, Dagleish’s acting is of the highest quality. Likewise, his co-star Freya Sharp who offers admirable support in a variety of roles.

The script is competent, it holds attention. Knott’s own clever direction helps a great deal. It’s all going very well until the ghosts arrive. They are more future focused, fair enough, and come with surprises I won’t ruin. But the glimpses at life that restore Bob’s faith in Christmas are so rushed, they become nonsensical. Knott doesn’t give himself, his audience, or his ideas enough time.

Dagleish keeps up the good work. There is more for Sharp to do – and she does it well. And Emily Bestow’s set comes into its own – the design gets a big tick even if I’m not sure about why we visit the places evoked. If some parts of Cratchit disappoint, there’s a lot of enjoy.