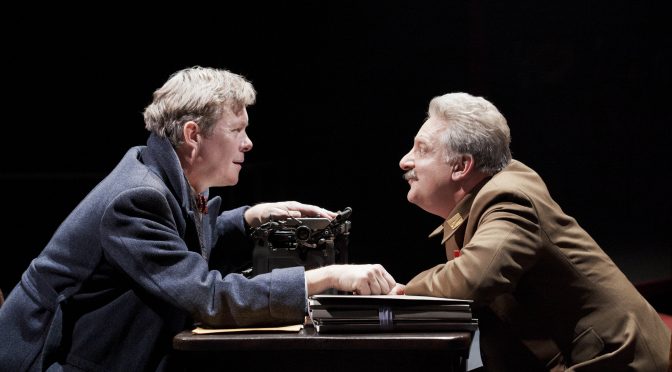 Having welcomed Danny Boyle earlier this year, the National Theatre now stages a new play written by his frequent collaborator John Hodge. A fantasia inspired by Mikhail Bulgakov’s play about Stalin, commissioned for the dictator’s 60th birthday, Collaborators is a romp around censorship and responsibility.
Working in the round for the first time in many years Nicholas Hytner directs with zeal. Designer Bob Crowley’s constructivist inspired set doubles as the Bulgakov home and a bunker under the Kremlin where the writer and tyrant meet. The theatre-loving Stalin can’t resist helping out. “Leave the slave labour to me,” he says, offering himself as amanuensis, then taking up the pen in person – on the condition that Bulgakov has a turn at running the country. It’s a glib allusion, but performed with such brilliance that its questionable taste is pushed to the back of your mind.
The wonderful Alex Jennings is Bulgakov, a “smack head groin doc turned smut scribe,” as Hodge brilliantly describes him. Jennings brings every nuance out of the role showing convincing relationships with Jacqueline Defferary, who plays his wife, and Mark Addy, who excels as the Secret Service man tasked with directing the play. Addy’s changing attitude to his artistic challenge, and the snippets of the play we get to see performed so skilfully by Perri Snowdon and Michael Jenn, are a real joy.
There aren’t many stage actors that can rival Jennings. But Simon Russell Beale is among them. His despot with a West Country burr is a hilarious and chilling creation – one who manipulates the audience as skilfully as his character plays with the writer.
Collaborators suffers slightly from the brevity that is also frequently its virtue: Hodge’s writing is immediate and clear but, as the drama increases, the play itself is not always dark or detailed enough to satisfy. Nonetheless, Collaborators is very funny indeed and, with its stellar cast, is an unmissable winter highlight.
Until 31 March 2012
www.nationaltheatre.org.uk
Photo by Johan Persson
Written 8 November 2011 for The London Magazine