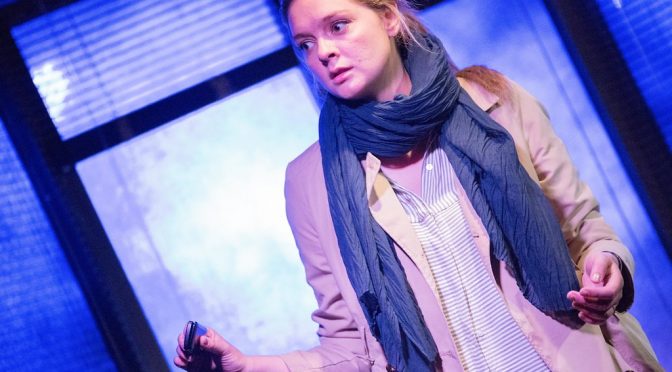 John Foster’s new play has two strong ideas behind it: the scenario, of a killer hiring a private detective to stop him killing, and the delivery, which has the story retold and commented on simultaneously. The plot has the potential to grip and the telling, with characters revealing their inner dialogue, creates the entertaining sensation of reading a book. Sadly, implementation of this novel technique has appeal only for aficionados of crime fiction.

Megan Pemberton takes the lead as Jackie, an ex CID with PTSD and an overripe vocabulary, who is haunted by phone calls from the titular “maybe murderer”. Foster knows his heroine is too close to cliché and is playing here – but the game has limited appeal and doesn’t make things easy for Pemberton. Credit to Pemberton for holding the stage: direct addresses are strong and her detailing of Jackie’s mental breakdown, leading to the play’s twist, is good.

Her friend on the phone, Chummy, is an even harder role that Calum Speed tackles well. The character is a blank slate described in detail – an oxymoron that should ring bells well before we learn his name. Speed manages to make it work with a creepy laugh and various voices. As for Chummy’s victims – played valiantly by Jessica Tomlinson – oh dear. The first has a little wicker basket to carry flowers and uses the word “fudge” a lot. The second is an equally unbelievable police woman who acts as a stand-in at the world’s least successful crime reconstruction.

There is a point to reach and some skilled direction from Alice Kornitzer propels the audience. But Foster needs to curb his enthusiasm. More than one scene might be cut and all of them curtailed. The plot is slow and the language verbose. The aim of steeping us in noirish thrillers falters with pained metaphors, excessive alliteration and a lack of humour. That the dialogue is odd eventually makes sense, but the language is jolting – I am sure I heard the word milquetoast used at one point, and lost a few lines after that in bewilderment. There’s far too much lyrical talk of The City – unspecified – and as Foster surely knows, fictional detectives need defined locales; nice try for something different but it doesn’t work. The evening is saved by some nice touches from Kornitzer and three strong performances but the play is overwhelmed by the genre that inspired it.