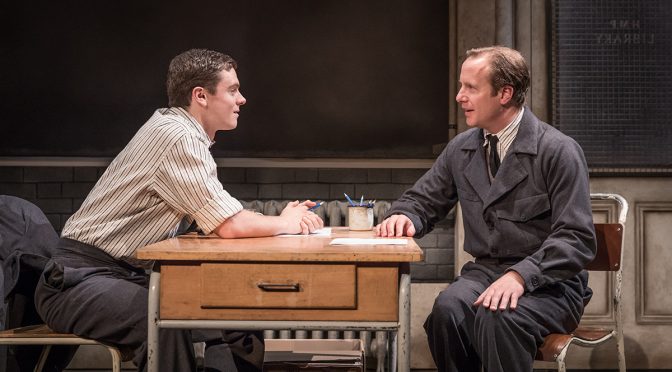 Edward Hall always puts on a classy show. His direction for this first revival of Simon Gray’s 1995 play is, typically, clear and careful. And Hall always gets great performances from a cast: here Geoffrey Streatfield plays the spy George Blake, alongside Emmet Byrne as Sean Bourke, who “sprung” him from prison, and both are superb. Joined by Philip Bird, Cara Horgan and Danny Lee Wynter, who play different characters aiding and abetting the criminals in the UK and then Russia, it’s as fine an ensemble as you could wish for. The production also boasts an impressive set from Michael Pavelka that feels ready and waiting for a West End transfer.

The only problem is that this is a disappointing play that Hall has an unjustified faith in.

While Cell Mates is based on a thrilling real-life story, complete with Blake’s extraordinary break-out from Wormwood Scrubs prison and subsequent life in Russia, the play steers away from a documentary feel or political commentary. Fair enough. But for a piece rammed with spies and the Cold War, it seems perverse to include so little tension. A scene in Blake’s safe house shows Gray’s strength for farce, expertly executed here, while making the KGB officers we meet funny is fine (Wynter is especially good at this), the play isn’t really a comedy either. The focus is Blake and Bourke’s relationship: why the latter helped the former, and why he was subsequently betrayed and imprisoned when visiting Blake in Moscow. Unfortunately, the duo’s friendship isn’t made interesting enough.

Blake and Bourke’s first meeting is gnomic, if intriguing. Scene II starts to reveal some idea of why Bourke might be around – he wants to be a writer and senses “a story to tell and a story to sell”. While this motif is taken up as both men work on books when in exile it does not settle the question of their bond or provide motivation for what they go through together. Talk of a “country of the future” and ideologies is given the briefest lip service. Streatfield and Byrne depict the stress of imprisonment in an accomplished way but the question of their attachment becomes an overwhelming puzzle. Their friendship may well be inexplicable, but Gray doesn’t speculate or explore it in depth and the void created makes the play a pointless struggle.