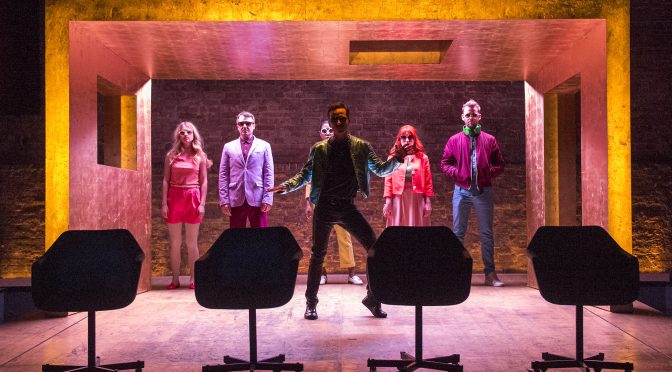 Simon Stephens’ new play Birdland, currently showing at the Royal Court, follows pop star Paul as he reaches the end of a massive world tour. An investigation into fame and fortune, about a spoilt singer with ridiculous riders and a subsequent sorry end, the topic might seem a little old hat. Let’s face it: sympathy for celebrity is a tough call. But Stephens’ treatment of the subject, combined with director Carrie Cracknell’s startling contribution, makes this an intriguing piece. Like a really great pop song, this is a play that will worm its way into your head and stay there a long time.

We don’t know what kind of music Paul is famous for, or if he’s any good. We just see him before the gigs, in a series of luxurious hotels, spending money, taking drugs and in one scene, demanding a locally grown peach be delivered to his suite. And Cracknell’s deft direction shows us that untold wealth is just as boring as the rest of us imagine it to be.

Birdland is more about money than music; all Paul’s experiences are commodified, as he tells an interviewer that ‘everything can be quantified’. More distastefully, he is abusive to every woman he meets. Make no mistake, Paul is grotesque: yet somehow, Stephens makes him play on our sympathies.

Much credit must go to Andrew Scott for his performance in the lead. His stage presence and sheer sex appeal make it easy to believe he could be a pop star. His descent into madness is moving and he brings out the complexity of Stephens’ character – a kind of idiot savant with a touch of Candide. His physical investment in the part, with jerky avian dance movements, is committed and in keeping with Cracknell’s stylised production.

Scott is joined by a gifted ensemble that takes on several other characters, regardless of the age or gender of the roles, and the performances are uniformly superb. The set design from Ian MacNeil, with a stage surrounded by dirty water that retracts as the action becomes grimmer and forces the cast to get their feet wet, is remarkable. The whole night might contain far too much metaphor for many but I found it thought provoking. The imagery and the ideas, especially Paul’s claim to be “completely human” despite his lack of empathy, gives Birdland a haunting quality.

Written 30 April 2014 for The London Magazine