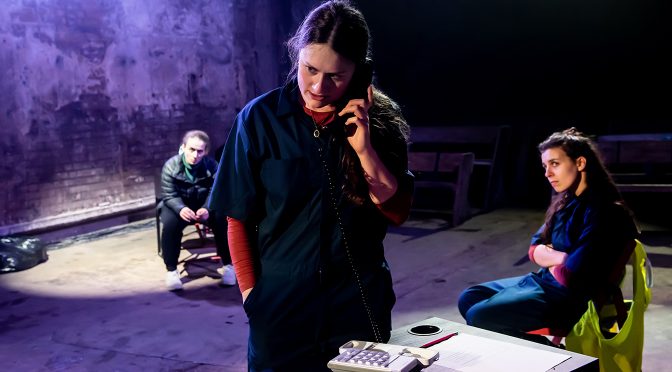 Cat Kolubayev’s comedy thriller is a little treat. A neat if queasy scenario, about a sinister waste disposal business and its new recruit, has great characters and a wicked sense of humour.

Adeline Waby and Madison Clare – both superb comedians – play the firm’s psychopathically quirky employees. There’s a great sense of their offbeat relationship being long established. Waby’s character is steely and smart, Clare’s deadpan and whacky, and both get great laughs from lines both blunt and surreal – a mix of nonchalance and concern is nicely handled. Into the mix comes Belinda, another strong showing from Helena Antoniou, who tackles the distinct humour just as well and adds a touch of mysterious tension.

Exciting as the Vault Festival is, it has to be mentioned (again) how poor the acoustics are. The venue does not serve this piece well. It’s clear that the talented cast have to shout more often than the script needs, a fair call on Bruce-Jones’ part but I’d love to hear a quieter menace in some lines.

The short running times at the festival also prove a drawback. Kolubayev plots well, playing with predictable genre elements, I really wanted to know more about the “someone” in charge who communicates only by phone. But the show feels truncated. More, please – let’s hope this piece can be expanded. A sense of shock at the abrupt end shows Bin Juice is as engrossing as it is gross!