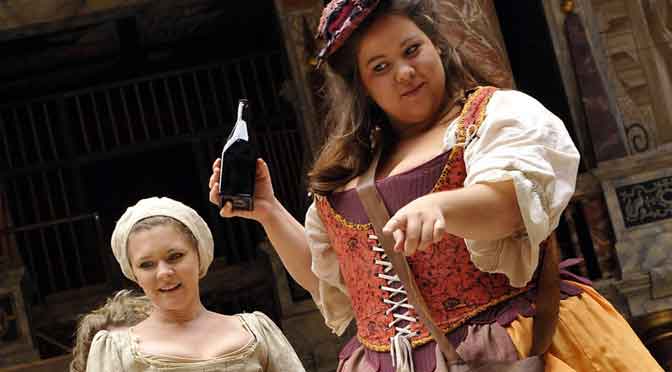 Nell Leyshon, the first woman ever to write a play for The Globe, has chosen her subject well. A story set in Bedlam, drawn from research into the Bethlem Hospital, the first and foremost home for the insane. To give us a break from the bard, the action takes place in the 18th century, where the gin flows freely and visitors pay to view the unfortunate residents of the asylum. As an audience we both replicate this morbid tourism and double as the inmates ourselves. The idea is typical of Leyshon’s clever and careful use of the space. While her play could be madder at times, she has a shrewd eye and ear for what works well at The Globe.

Director Jessica Swale also knows how to use The Globe’s distinctive intimacy. Her talented ensemble is given reign to have great fun. Pity those poor Groundlings (the standing audience members) as they have chamber pots poured over them and are dragged on to the stage. You have been warned.

There’s a lot of laughs here and, if mixing humour and mental illness can be tricky, rest assured it is tastefully done. Jason Baughan is the man in charge – having inherited his post he is proud to come from a long line of Mad Doctors. Sam Crane is a poet, trying hard to be pale and interesting and full of machinations. They both make delicious villains. A pleasing amount of fantasy is used to resolve the neat storyline and deliver poetic justice. Predictable maybe, but satisfying.

Where Bedlam really takes off is with its music. Leyshon researched contemporary sources and, with Olly Fox’s composition and Mark Bousie’s musical direction, has added to her play enormously. Sentimental songs are used with restraint and some hilariously bawdy numbers beg an encore. James Lailey is cast as a ‘Bedlamite’, an inmate released to earn his living busking, and given a moving story with contemporary resonance. Alongside him Ella Smith’s Phyllis is the roaming wife of a Bedlam warder, selling gin on the street as if she were a procuress. Smith gives great value for money, delivering an irristible performance. When the rest of the cast join in the singing, Bedlam becomes very special indeed. Treat yourself to a listen, enjoy some uproar, and don’t forget the gin.

Written 10 September 2010 for The London Magazine