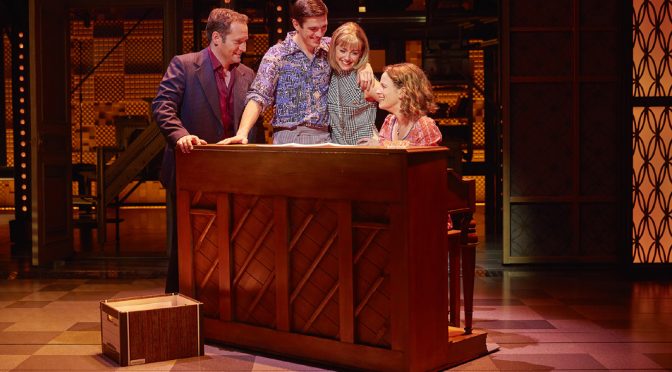 Advice about writing reviews includes avoiding overused adjectives. Top of the list is hilarious… beautiful comes next. So, it’s a bad sign when a show has such an inane moniker. There are joyous moments in this biography of singer-songwriter Carole King – her back catalogue ensures that – but they are few and far between, leaving me mystified as to the show’s acclaim. Maybe the aim was to be beautifully simple – instead it is simply boring.

The cast of Beautiful performs well. The four leads sound great, especially Katie Brayben as King and Alan Morrissey, who plays her husband and lyricist Gerry Goffin. The ensemble takes on cameos of the stars and bands that performed King and Goffin hits with a good deal of spirit. The problem is with the book. Douglas McGrath pays only lip service to the changing times of the Sixties, while King’s life story is ticked off like a list.

Precocious teenager Carol writes a hit song. Meets a boy and writes some more hit songs. Breaks up with the boy and writes her best stuff yet. There just isn’t enough going on. Another song-writing couple, Cynthia Weil and Barry Mann, joins in, and McGrath makes their similarly humdrum story not just a foil but a focus. Lorna Want and Ian McIntosh, as the more spirited and humorous Weil and Mann, end up more appealing than the show’s real subjects.

The hit factory at 1650 Broadway that they all work in is the setting, under the management of Donnie Kirshner (Gary Trainor does well with this thinly-written role). The atmosphere is strangely amiable, maybe writing just wasn’t a struggle for King – I can believe it given her talent – but it turns the show into more of a CV than a story. Goffin’s adultery and nervous breakdown are downbeat: King didn’t have a nice marriage, then she got a haircut and everything was OK.

Performances of the songs by anyone else aren’t allowed to outshine King’s so they are presented, if not performed, as frigid relics – a problem since they make up most of the show. Which means Beautiful doesn’t even work as a jukebox musical. When we get to King’s success, someway into the second act, the story of Tapestry, her Grammy award-winning album, feels truncated. Any idea of her growing into a performer or her life feeding into her art, have no time to develop. Her achievements in this telling aren’t worth waiting for, which is as bad as a biography can get.