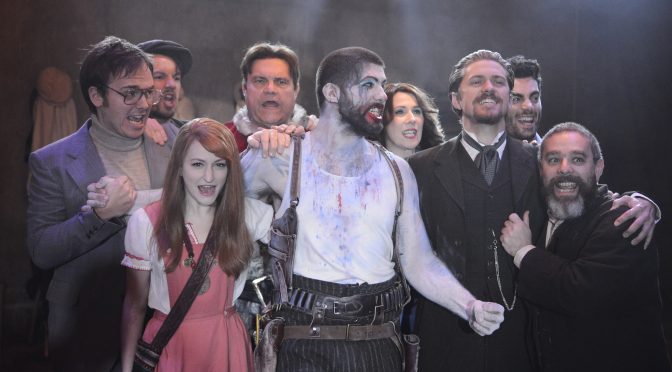 Many musicals – and I love them for it – push the boundaries of the genre. Stephen Sondheim’s Assassins is a great example; musically and lyrically adventurous, with notably long spoken passages and a book by John Weidman that feels defiant. The idea of a musical telling the stories of those who have tried to assassinate presidents of America, seeking out their motivations and uniting them in infamy, is brilliantly bold.

The Menier Chocolate Factory’s new production directed by Jamie Lloyd does justice to the piece’s bravery. Lloyd isn’t frightened by how mad these men and women were. A fairground setting adds a scary surrealism and the staging in traverse makes it confrontational: most of the audience ends up looking down the barrel of a gun at some point. It’s appropriate that we feel ill at ease ­– these are tragic tales and Lloyd’s gory touches ensure there’s no chance of these characters receiving the acclaim many of them wished for.

The cast, onstage watching each other throughout, is tremendous. Intense performances, buoyed by demanding monologues, show the strength of the acting. Catherine Tate plays a hapless housewife who attempted to kill Gerald Ford and Mike McShane has a stirring speech as Samuel Byck who tried to crash a plane into the White House. Assassins takes us to dark places.

A trio serves as the focus of the show. The always-excellent Simon Lipkin presides over the fanatics’ funfair. Aaron Tveit is superb as John Wilkes Booth, creating a charismatic prototype for those who followed his murder of Abraham Lincoln. Jamie Parker is marvellous, first as a balladeer presenting another side of the stories, then as Lee Harvey Oswald, embodying a contest between stability and disruption, so perfectly understood by Lloyd, who has created a show close to perfection.