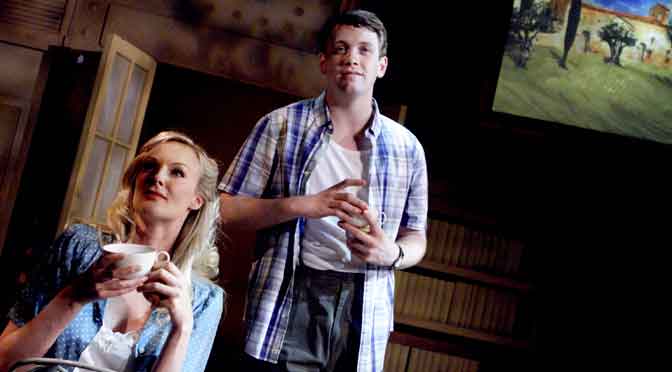 Aspects of Love was a bold musical departure for Andrew Lloyd Webber back in 1989. Following the success of Phantom of the Opera, it seems the composer was determined to produce something different – a small, intimate chamber piece with a simple theme and storyline.

Reports of the original production at the Prince of Wales Theatre suggest the musical was somewhat lost in the West End. It faired even less well on Broadway. Now its original director, Trevor Nunn, is back to have another go and, thankfully, at the Menier Chocolate Factory the whole piece comes alive.

As we follow the characters’ lives and loves, through infatuation, betrayal, amity and familial affection, we cannot resist being pulled in. And David Farley’s clever set is the perfect minimal setting in which to develop the drama and embrace events and emotions.

Nunn’s rather indulgent direction takes a slower pace than we might expect. He clearly revels in the musical’s many tête-á-tête scenes. The care taken, combined with the strong cast assembled, pays off.
Katherine Kingsley plays Rose Vibert, and Rosalie Craig is Giulietta Trapani, and both make convincing love interests for the men of the piece. Kingsley has the difficult task of playing an actress who might have fallen for her own press, but she still manages to be appealing. Craig’s magnificent energy results in the most electrifying number of the night, the funeral celebration of both women’s lover, George.
The role of Sir George is played by veteran musical theatre actor Dave Willetts. He gives a vintage performance full of energy and technical knowhow. At the other end of the spectrum, we have a great stage debut in Rebecca Brewer as George and Rose’s daughter, Jenny.

Best of all, and it really is a close call, is the London stage debut of Michael Arden. He assumes the lead role of Alex with such charm that he is in danger of winning us over a little too much. From gangly adoration of Rose, to crazed passion and then a cool melancholic acceptance of her betrayal, his performance is as rich as his mellifluous voice. Just like the wine enjoyed on stage throughout the show, this is a fine performance within a full-boded production that’s a delight to savour.

Written 23 July 2010 for The London Magazine