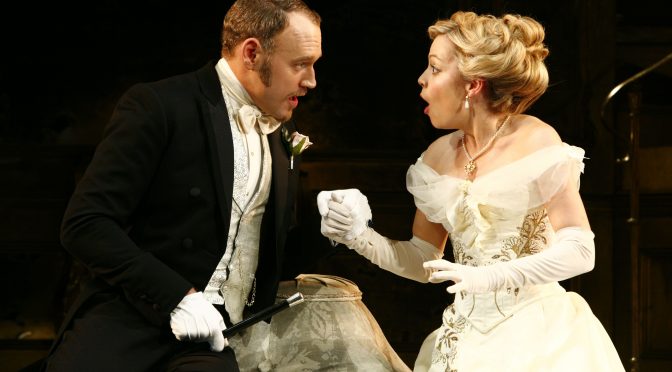 We sometimes forget what a political writer Oscar Wilde was. An Ideal Husband is the story of a successful MP whose corruption comes back to haunt him. A crime he once committed, and upon which his fortune is based, is used to blackmail him in a play that is as much a comedy of morals as of manners.

This is a luxurious production. Designer Stephen Brimson Lewis’s golden sets deserve the applause they receive, and are all the more impressive for not being slavishly historical. Lindsay Posner’s direction is similarly lavish, the pace is leisurely, so that we can fully savour Wilde’s delicious ironies.

Alexander Hanson and Rachael Stirling play the couple that faces ruin from the unravelling scandal. Both work well with the play’s occasional melodrama, and inject real emotion into their very Victorian marriage. Samantha Bond excels as, “that dreadful Mrs Cheveley, in a most lovely gown” who is, “as large as life and not nearly so natural”. Bond is fresh and deliciously wicked as this crinolined thief and blackmailer.

Elliot Cowan’s performance as the Viscount Goring is revelatory. Goring is the Wildean dandy we all expect but Cowan not only delivers his aphorisms admirably, he adds a depth to the character that includes a truly steely edge.

Both Goring and his fiancée Mabel, charmingly performed by Fiona Button, tackle Wilde’s epigrams with just the right amount of knowing glances, for some of them are silly. But one line resonates: “Always pass on good advice. It is the only thing to do with it.” My advice? Get a ticket for this classy production as quickly as you can.

Written 12 November 2010 for The London Magazine