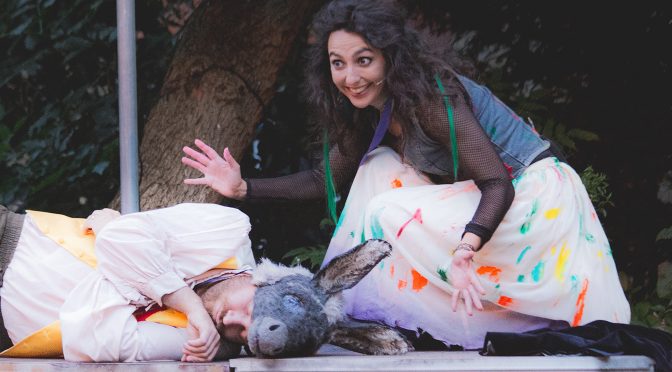 Sara Aniqah Malik’s adaptation of Shakespeare’s comedy for Iris Theatre brings fun to the fore. There are flaws, and inconsistencies, with perhaps less actual Shakespeare than you might expect. But it’s a safe bet that most will enjoy this high energy, full-of-ideas show.

The action is set in the Athens Academy in 1996 (maybe the year suggests Ancient History for its young audience?). Shakespeare at school is fine for the story’s teenage lovers – Freddy Elletson and Ricky Oakley have their finest moments playing Lysander and Demetrius with tongues firmly in cheek – but the conceit fails other aspects of the play.

The acting troupe are recast as a Glee Club, which is jolly enough but forced (why not just the school drama department?). Theseus and Hippolyta are, predictably, Prom King and Queen, but, like their fairy counterparts Oberon and Titania, the roles lack tension. The additional text is witty, and plenty of the comedy touches land, but there’s an awful lot lost.

Magical is probably the word most used in connection with A Midsummer Night’s Dream, but not here. Despite Ailsa Joy’s impressive efforts as Puck – she’s great – the play’s fairies and potions don’t fit in. Drama is constantly deflated in the search for a joke. Most dangerously, there’s a strain on comprehension: the fear here is that you need to know the original play to work out what is going on and to get the jokes.

There are new ideas that illustrate a good deal of intelligence. The production wants to raise the question of consent. And the women in the play get more of a say in how they are treated. But these touches are too small or come too late and they sit heavily in the humour. Malik’s direction doesn’t help. Too much of the production needs tightening, especially in marshalling the crowd at this promenade performance and controlling the audience focus. Likewise, with the performances – there’s a lot of running around, which is impressive, but distracting.

The production is invested in audience participation. In a bold strategy, you can:

If this strikes fear into you, I understand. If the above sounds great, then this is the show for you.

The strongest comedians, Richard Holt (who plays Bottom) and the excellent Zena Carswell, are superb with the crowd. There are risks with calling on members of the public (a press night isn’t the best time to judge, as friends who are performers too turn up!) but best of luck to all. Drawing on good will is how Malik aims to create the friendship Puck calls for at the end of the play – and hopefully get the applause the show’s efforts deserve.